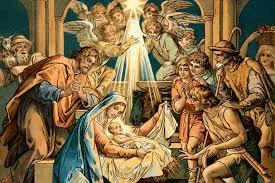 “And the Word was made flesh, and dwelt among us, and we beheld his glory, the glory as of the only begotten of the Father, full of grace and truth.” (John 1:14)

On the 29th of the month of Kiahk our Coptic church celebrates the birth of Our Lord Jesus Christ, the Incarnate God in the Flesh from the Theotokos virgin St. Mary.

Through the Divine plan of God and His foreknowledge, Caesar Augustus issued a decree for a general census in all the Roman Empire. For that reason, Joseph rose, and the virgin with him, and went from the city of Nazareth to “Bethlehem” to be counted in the census there because he was from the tribe of Judah, from the house of David. Bethlehem was the city of David. When they arrived in Bethlehem, the Virgin gave birth to her first born child and she wrapped him in swaddling clothes and put him in a manger, for they did not have a place for them in the inn.

Now there were, in the same country, shepherds living out in the fields, keeping watch over their flock by night. And behold, an angel of the Lord stood before them, and the glory of the Lord shone around them, and they were greatly afraid. Then the angel said to them, “Do not be afraid, for behold, I bring you good tidings of great joy which will be to all the people. For there is born to you this day in the city of David, a Savior, Who is Christ the Lord. And this will be the sign to you: you will find a Babe wrapped in swaddling clothes lying in a manger.” Suddenly there was, with the angel, a multitude of the heavenly host praising God and saying: “Glory to God in the highest, and on earth peace, good will toward men.” So it was, when the angels had gone away from them into heaven, that the shepherds said to one another, “Let us now go to Bethlehem and see this thing that has come to pass, which the Lord has made known to us.” And they came with haste and found the Babe, Mary, Joseph, and Salomi. The place was shining with light. Now when they had seen him, they made widely known the saying which was told them concerning this child. Then they worshiped the child and they returned, glorifying and praising God for all that they had heard and seen. (Luke 2:1-20)

On this day, the prophecies about the birth of the Lord from a chaste virgin had been fulfilled. Isaiah the prophet said, “Behold the virgin shall conceive and bear a Son and shall call His Name Immanuel.” (Isaiah 7:14) Ezekiel the prophet also said about this wonderful mystery, “And the Lord said to me, “This gate shall be shut; it shall not be opened, and no man shall enter by it, because the Lord God of Israel has entered by it, therefore it shall be shut.”” (Ezekiel 44:2) About this child, Daniel the prophet said, “I was watching in the night visions, and behold, One like the Son of Man, coming with the clouds of heaven! He came to the Ancient of Days, and they brought Him near before Him. Then to Him was given dominion and glory and the Kingdom that all peoples, nations, and languages should serve Him. His dominion is an everlasting dominion, which shall not pass away, and His Kingdom the one which shall not be destroyed.” (Daniel 7:13- 14) Jeremiah the prophet said, “Behold, the days are coming, says the Lord, that I will raise to David a Branch of Righteousness; a King shall reign and prosper, and execute judgement and righteousness in the earth. In His days, Judah will be saved and Israel will dwell safely; Now this is His Name by which He will be called: The Lord Our Righteousness.” (Jeremiah 23:5-6)

We must therefore now direct our minds toward the manger of Bethlehem, where the Son of God was lying in it in the flesh at the time of His birth, contemplating in silence and reverence worthy of the mystery of the incarnation of God, and His birth in a manger for our salvation. Knowing that He teaches us through this mystery to despise the world and all the vain things in it, and that He urges us to be humble and to love our neighbor seeking his own good, and that we should live in virtue and holiness according to the Christian ethics; not ignoring the great dignity that has been granted to us by this Divine Incarnation. Since we have kept this fast before the Advent, and have arrived at this glorious feast, we should receive it with purity and every good thing. We should extend our hand to comfort the weak, to help the poor, and to be instruments of peace and reconciliation among the people, taking our Lord Who has made an eternal peace by His Incarnation as our example.

May God grant us many returns of this feast, filled with the blessings of our Lord and Savior Jesus Christ, Who came for our salvation.