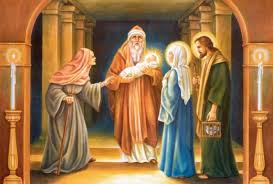 “When the time came for the purification rites required by the Law of Moses, Joseph and Mary took him to Jerusalem to present him to the Lord.” Luke 2:22

The feast of presentation of the Lord Jesus Christ into the temple is one of the minor feasts of the Lord. It is celebrated on the eighth day of the month of Meshir. It was an important Jewish tradition of blessing that the couple take their first-born son to the temple. The baby was taken to the Temple forty days after his birth and was dedicated to God. If the parents were wealthy, they were to bring a lamb and a young pigeon or a turtle dove to be offered as a sacrifice at the Temple. The custom provided that if the parents were poor, they were to offer two pigeons or two turtle doves for the sacrifice.

Mary and Joseph were faithful Jews and observed their religious customs. When Jesus was forty days old, Mary and Joseph took Him to the Temple in Jerusalem. They took two turtle doves to offer as a sacrifice at the Temple.

Present in the temple, at the time our Lord Jesus Christ was brought in, was Simeon of Jerusalem, a devout, just and elderly man.

When Simeon was translating the verse from Isaiah 7:14, “Behold, the virgin shall conceive and bear a Son, and shall call His name Immanuel,” he was afraid to translate that a virgin would conceive, because the King would mock him. He wanted to translate the virgin as a “young lady.” He was disturbed because of this inaccurate translation, and God revealed to him in a vision that he would not die before he would see Christ the Lord born of a virgin.

This was fulfilled and he lived about three hundred years. When Christ was born; he was very well advanced in age and his sight dimmed.

When he carried the child Jesus in his hands, his sight came back to him, and the Holy Spirit told him, “This is the child that you have been waiting for.” He blessed God and said, “Lord, now let your servant go in peace according to Your promise, because my eyes have seen Your salvation which You have prepared before the face of all peoples, a light to bring revelation to the Gentiles, and the glory to Your people Israel.” (Luke 2:29-32)

Present in the temple also was another elderly and devout person also anticipating and prepared to meet her Messiah… “Now there was one, Anna, a prophetess, the daughter of Phanuel, of the tribe of Asher. She was of a great age, and had lived with a husband seven years from her virginity; and this woman was a widow of about eighty four years, who did not depart from the temple, but served God with fasting and prayers night and day” (Luke 2:36-37). When she saw Christ she praised God and spoke of him to all who were awaiting the Messiah.

After Jesus was presented in the Temple, the family returned to Galilee to the town of Nazareth. The Bible tells us that Jesus grew and became strong, and was filled with wisdom.