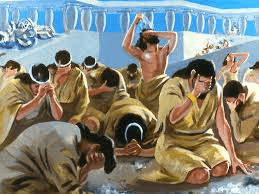 “So the people of Nineveh believed God, proclaimed a fast, and put on sackcloth, from the greatest to the least of them. Then God saw their works, that they turned from their evil way; and God relented from the disaster that He had said He would bring upon them, and He did not do it.” Jonah 3:5,10

Fast of Nineveh is known to be the fast of repentance, humility and the return to God. Thus, the church considers this fast to be one of the fasts of the first degree, similar to the fasts of Lent and Wednesday and Friday.

Fast of Nineveh commemorates the three days that the Prophet Jonah spent in the belly of the great fish and the subsequent fast and repentance of the Ninevites at the warning message of the prophet Jonah.

The people of Nineveh fasted, wore sackcloth from the youngest to the oldest, they called to God and each one repented of his or her evil ways. God responds to their repentance, since it is the most important thing that moves the heart of God towards mankind. “God saw their works, that they turned from their evil way; and God relented from the disaster that He had said He would brig upon them; and He did not do it” (Jonah 3:10).

May the blessings of this holy fast bring to our hearts, minds, and spirits the true love, mercy, longsuffering nature, and compassion of our Lord and Saviour Jesus Christ. Let us use these three days to offer repentance from our hearts, as did the Ninevites, seeking the forgiveness of our sins. Let us give thanks to the Lord who prepares our way for us through all tribulations and trials, as He prepared the belly of the whale for Jonah. Let us put ourselves before our Lord, as humble obedient and faithful servants of the One True God, seeking to hear the message that He desires to give to the world through us.

The Book of Jonah has a message of Salvation

The story of Jonah foreshadows the redemptive work of Jesus Christ.

God sends Jonah to the people of Nineveh. The People were Gentiles, thus showing God’s desire to save all mankind.

Christ’s Salvation is for all, “but in every nation whoever fears Him and works righteousness is accepted by Him.” (Acts 10:35)

God uses Jonah to save the mariners on the boat. These men were also Gentiles, but they were men seeking the Lord.

a. They prayed to their gods before taking any actions (1:5)

b. They asked Jonah to pray to his God so that they may not perish (1:6)

c. They believed Jonah when he said “I am a servant of the Lord, and I worship the Lord God of heaven, who made the sea and the dry land” (1:9-10)

d. They desired to save Jonah’s life by rowing harder, even after he told them to throw him in the sea (1:13)

e. They prayed for forgiveness from the true God (1:14)

f. They feared the Lord and offered Him sacrifices (1:16)

“They were endeavoring to find God’s will in order that they might carry it out.  When the sea ceased its raging by their throwing Jonah into it they were assured of the presence of God in the matter.  They believed in the Lord, offered Him a sacrifice and made vows.  In their belief in the Lord they not only believed that He was God but by offering Him a sacrifice they professed their belief in the propitiation of blood.”

God uses the whale to save Jonah

b. Jonah was in the belly of the fish three days and three nights (1:17)

He did not prepare it to destroy him but to preserve him.  The great fish was not a punishment but a shelter.  Jonah was safer and more comfortable in the belly of the whale than if he were still in the ship struggling against the waves and the sea, and against fatigue, cold and wind. This whale was sent by God to carry out the Divine will entrusted to it

That whale acted with great discipline according to an assuring predestined Divine plan.  It appeared in the proper time and at the right place in order to carry Jonah in its belly.  It was as though this prophet was being taken from an open ship liable to being covered and drowned by the waves, into an enclosed and protected ship invulnerable to water and waves.  In due time the whale vomited Jonah onto dry land at the place, which God defined, there it left Jonah unharmed.

God saves the people of Nineveh

a. The Lord commands Jonah again to go to Nineveh

b. Jonah prophecies the destruction of Nineveh

Nineveh freed itself from death by fasting – Ambrose

Learn how delighted He is when fasting is honored. Like a heavenly power overseeing Nineveh’s charge, fasting snatched the city from the gates of death and returned Nineveh to Life – St. John Chrysostom

God saves Jonah from his pride

a. Jonah was still egocentric

b. Jonah enjoys the plant that God gave Him

c. Jonah laments over the plant that God takes from Him

d. God reveals his mercy and compassion through the plant

Jonah was still thinking of his dignity and of his word, which was not carried out.  It was the same thinking of old which had formerly induced him to flee from the presence of the Lord. Due to that thinking he deprived himself of the fellowship of heaven’s exultation. He separated himself from joining the hosts of angels in their joy over Nineveh’s salvation.  He proved by his anger that his way of thinking was subjective and not spiritual, and proved that his will was incompatible with the will of the heavenly Father “who desires all men to be saved and come to the knowledge of the truth” (1 Tim. 2:4).

In Nineveh, Jonah by his preaching was working with God in spreading His kingdom.  And outside Nineveh, God was working for Jonah to save his soul and deliver him from his misery

By H.H. Pope Shenouda III – Contemplations on the Book of Jonah the Prophet

Jonah was a figure of Christ.  St. Cyril of Jerusalem says, “As Jonah was thrown to the belly of the whale, the Lord Christ went by His own will to the unseen whale of death, to coerce him to give those who were swallowed by him; as it is written, “I will ransom them from the power of the grave; I will redeem them from death.” (Hos 13:14)

The Ninevites benefited from dealing with Jonah, the prophet who came out of the whale’s belly.  We enjoy the real Jonah, Our Lord Jesus Christ, who was able to ransom us from the depth of Hades, and to lead us into His heavenly Kingdom.