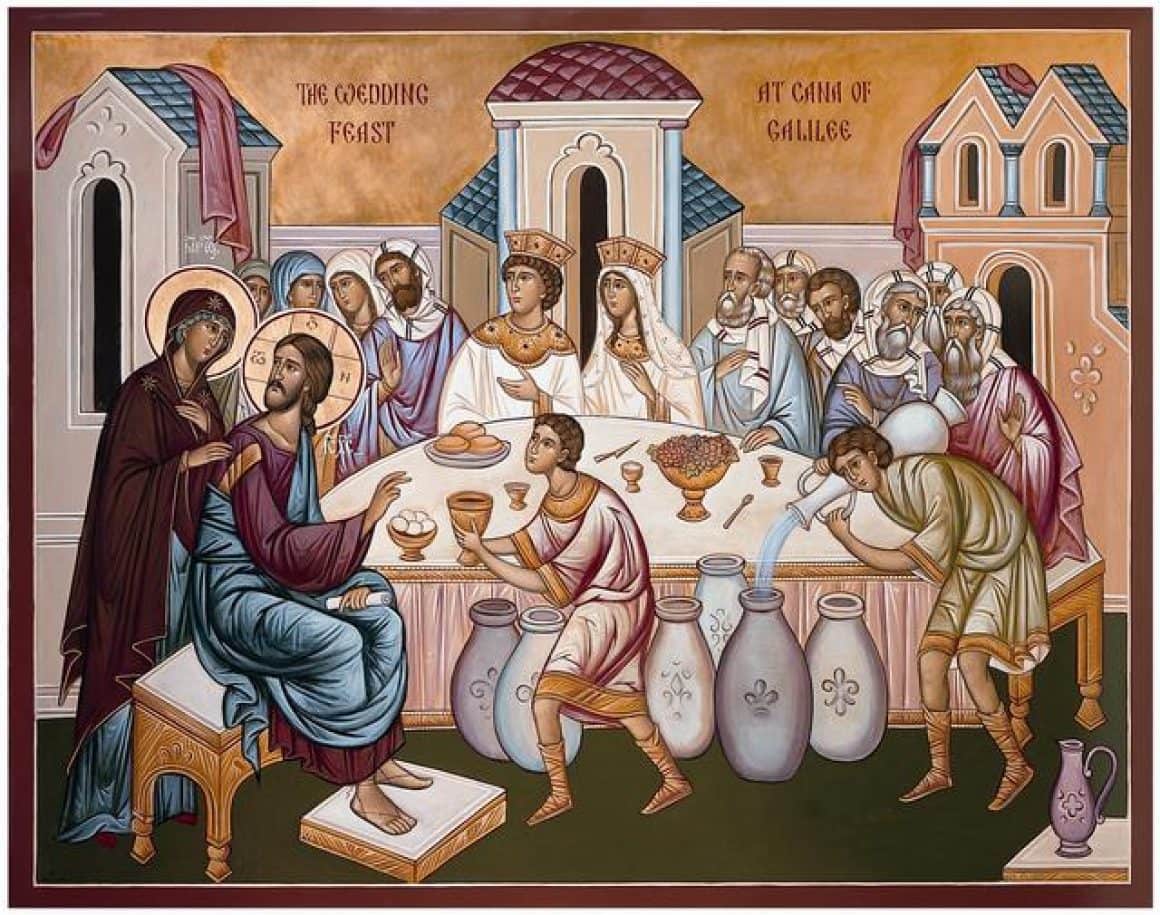 The church commemorates the feast of the Wedding at Cana of Galilee on the 13th of the Coptic month Touba. It is one of the minor feasts of the Lord.

Our Lord chose for His “beginning of signs” to be at a wedding in order to reveal His love for mankind. Because of His love, He has come to us to restore His marriage covenant with us and to transform our lives into a joyful wedding. He is enough to satisfy our souls. He is enough to supply all our needs. He comes to give us that joy which is ever new and does not run out, offering to us that which is best until we one day enjoy the finest blessings in the eternal kingdom. He comes to purify us from inside, and more than that, to restore our nature. He is the fulfillment of the Law. He is waiting, desiring for us to join Him in the marriage feast which is to come, if we will make ourselves ready (Revelations 19:6-9). He wants to carry all people to Heaven to partake of the Heavenly joy. Throughout the Old Testament we see Israel portrayed as the unfaithful bride; God continually pursuing her, lavishing His love upon her, and yet she seeks that which does not satisfy though the best is being offered to her. “Why do you spend money for what is not bread, and your wages for what does not satisfy?” (Isaiah 55:2)

The Lord began His ministry in Cana of Galilee, in a small corner of the kingdom. Our Lord did not choose the high places of Jerusalem, nor any of the notable cities of Palestine as the scene of His first miracle. He went to a quiet village in Galilee, Galilee of the Gentiles, a district much despised and there He worked His first miracle in order to proclaim that He has come to serve rather than seek glory from people. He came to serve the simple who do not resist like the Scribes and Pharisees. The Lord Jesus Christ began His supernatural, miraculous signs in Cana, not Judea, symbolized the Kingdom of Heaven’s imminent need to be spread beyond Judea into the entire world.

Also, at this wedding of Cana, we see that the wine had run out. The joys of this world had provided satisfaction but only up till a point; the world offers to us its best first and once we are hooked its ugliness begins to be revealed. “They have no wine”, this is the condition of the people of Israel ever since they have lost the joy of salvation. Although they had received the Law through Moses, it did not have the power to renew them. They were awaiting the One who would fulfil the Law. “Awake, you drunkards, and weep and wail, all you drinkers of wine, for it has been cut off from your mouth…” (Joel 1:5)

St. Mary was there to intercede to her Son in order to restore salvation. The wine of joy has run out, the prophets have been absent for a long time, and sadness and bitterness prevailed among the people. This signifies that the law does not achieve perfection, and did not give joy.

The Lord Jesus Christ performed His miracle quietly because the time to disclose Him to the world and to publicly enact miracles before the crowds has not yet come. As His person is revealed, the powers of darkness and the plot for His death enrages.

Moses during the ten plagues changed the water into blood that carried bitterness and death. All had broken the law and were subject to death. As for the Lord Jesus Christ, He turned the water into wine for He offers the joyful message of salvation. He came to save the world and not to condemn it, He came to grant inner fullness and joy. Jesus Christ could have created wine from nothing, but he transformed water into wine to confirm that He did not come to abolish the law, but to prefect it. The water here refers to the Old Testament and the law of the prophets, whereas, the wine refers to the Holy Spirit who gives comfort to our souls.

At the wedding in Cana of Galilee, the glory of Jesus begins to be uncovered. This miracle in the beginning of the Lord’s ministry manifested His glory and the disciples believed in Him and in His divine power.