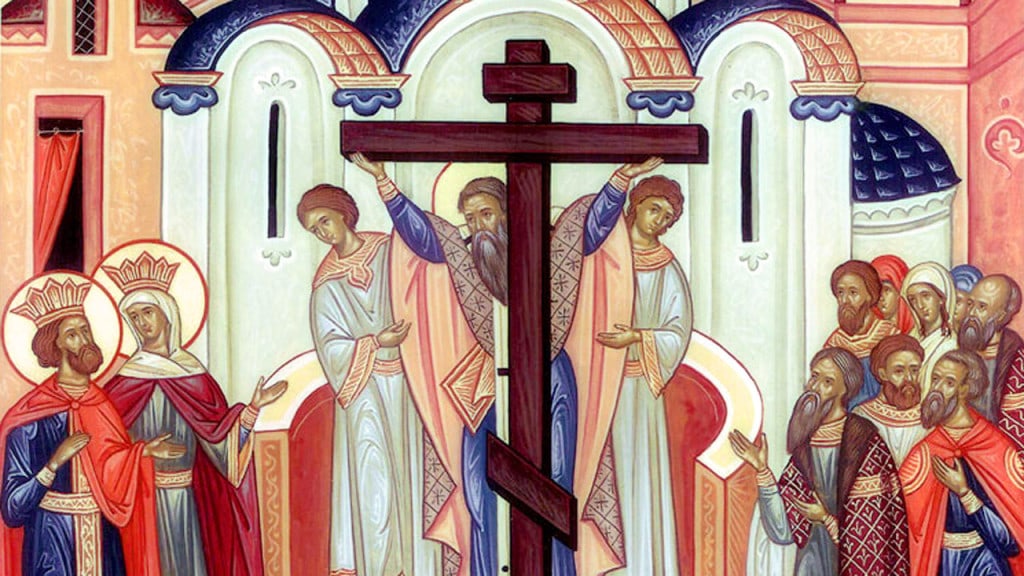 For the message of the cross is foolishness to those who are perishing, but to us who are being saved it is the power of God”. (1 Corinthians 1:18)

Because of the power and holiness of the cross, the Coptic Orthodox Church celebrates two separate Feasts of the Cross in its liturgical year. It is one of the major feasts of the Lord. Prayers are in the Sha’aniny and joyful tunes.

On 17 Tout (27th of September) for three days, the Church commemorates the discovery of the Holy Cross, the cross on which Christ was crucified by the Queen Helen, mother of the first Christian Roman emperor, Constantine in the fourth century. Early in the fourth century, Queen Helen went to Jerusalem in search of the holy places of Christ’s life, the Holy Sepulcher and the Cross.

Searching for the Cross, she made inquiry of Christians and Jews, but for a long time her search remained unsuccessful.

Finally, they directed her to a certain elderly Hebrew by the name of Jude who stated that the Cross was buried where the temple of Venus stood. They demolished the pagan temple and, after praying, they began to excavate the ground. Soon the Tomb of the Lord was uncovered. Not far from it were three crosses,

Saint Helen found the precious Cross together with the crosses of the two thieves crucified with our Lord.  The one on which Jesus died was identified when it healed a dying woman. Then, a funeral procession was passing that way, and so the body of the dead man was placed on each of the crosses, and when it was placed on the True Cross, the dead man came to life.

On 10 Paramhat (March 19), the church commemorates the restoration of the true cross to Jerusalem in the seventh century during the reign of the Roman emperor Heraclius. After he had defeated the Persian army, and forcing them out of Egypt, a Persian prince stole the Holy Cross from its church as his army returned to Persia in year 614 A.D. When Heraclius heard of this, he gathered the Roman army and marched to Persia where he recovered the Holy Cross and returned it to Jerusalem in 629 A.D., fifteen years later.