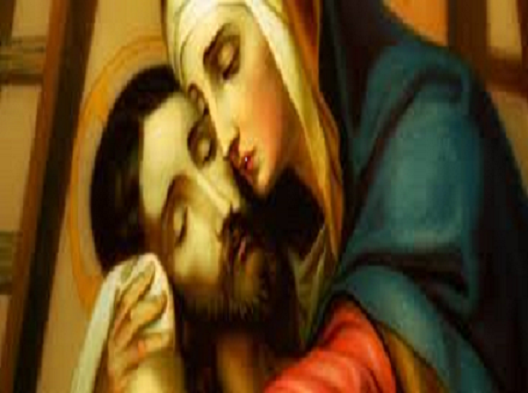 “The Holy Spirit will come upon you, and the power of the Most High will overshadow you; therefore that Holy One who is to be born will be called the Son of God”. Luke 1:35

On August 7th, the church celebrates the beginning of St. Mary’s Fast. The fast is 15 days long and precedes the Feast of the Assumption of the Holy Theotokos St. Mary on August 22nd.  St. Mary carried a name that has long been remembered as the Joy of Generations. It is through her enduring example of obedient faith, strong will, and spiritual purity that we come to understand why she is rejoiced of Angels.

St. Mary, the pure bride, the enclosed garden full of virtues that decorate her, and a sealed fountain, out of which we received the living water, our Lord Christ. (Isa 12:2,3; John 4:10; John 6:35)

This humility was manifested in her life; when the angel announced to her that she will become the mother of the Lord, but she said: “Behold the maid-servant of the Lord” (Luke 1:38), it was because of this humility that the Lord granted her that glory. “For He has regarded the lowly state of His maidservant” and made great things for her (Luke 1: 48, 49).

The humility of the Virgin was also manifested in her going to Elizabeth in order to serve her, during the period of her pregnancy. As soon as she heard that she was pregnant, in her sixth month, she traveled to her in a tiring journey across the mountains. She remained with her for three months, till her days were complete to give birth (Luke 1: 39-56). She did so while she was pregnant with the Lord of glory.

She lived saintly and purely in the temple. Then came a time when she had to leave the temple. She did not protest or object. She wanted to live without marriage, but they ordered her to live under the guardianship of a man, according to the custom in her days. She did not protest and she accepted to live in the custody of a man, as she had accepted to go out of the temple. She lived the life of abandon, not protesting, not resisting, not objecting, but quietly abandoning to the will of God, without discussion.

She was determined to live a life of virginity, and at the fullness of time, she was to bear the Son of God when God by the coming of the Holy Spirit upon her (Luke 1:35), she did not discuss, but replied: “Behold the maid -servant of the Lord! Let it be to me according to your word” (Luke 1:38).

She lost her two parents, when she was eight years old. She lived in the temple since she was a child, and she endured the life of solitude. She came out of the temple in order to live in the custody of a carpenter, and she endured the life of poverty. When she gave birth to her only Son, “there was no room for them in the inn”, then she “laid Him in a manger” (Luke 2:7). She endured the responsibility while she was in a young age. She supported the magnificent glory which surrounded her, without having thoughts of greatness.

She suffered the tiring voyage to Egypt and back. She suffered to be expelled there from town to town, because the idols were falling down in front of the Christ (Is. 19:1). She suffered to be a poor foreigner. She suffered that a sword would pierce through her own soul also (Luke 2:35) because of that which her Son met, the persecutions, the insults, and lastly the suffering and the shame of the cross. The Virgin was not satisfied only to endure negatively, but she lived in the jubilation by the Lord as she said in her hymn: “my spirit has rejoiced in God my Saviour” (Luke 1:47).

When Herod menaced to kill her Son, in the flight to Egypt, and in the persecutions from the Jews, she did lose her faith, she knew that the Son of God will sit to reign on the throne of his father David and there will be no end to his kingdom (Luke 1: 32-33). But she was rather patient; and as Elizabeth said about her “And blessed is she that believed: for there shall be a performance of those things which were told her from the Lord” (Luke 1:45).

St. Mary believed that the “Holy One who is to be born will be called the Son of God.” (Luke 1:35), in spite of his birth in a manger. What she believed in, was realized for her, by way of the visions and the angels whom she saw, and the miracles which were accomplished by Him. She believed in all that, in spite of the persecutions to which He was exposed. She believed while He was on the cross, then she saw Him after His resurrection from the dead (Matt. 28).

Life of Silence and Prayer

The holy virgin St. Mary, having seen wonderful things which probably exceed the endurance of her age as a young girl and miracles that surrounded her and having heard the words of angels, shepherds, and wise men from the East, she did not speak proudly about the events of the Nativity, but “kept all these things and pondered them in her heart” (Luke 2″19).

“For He has regarded the lowly state of His maidservant; for behold henceforth all  generations will call me blessed.” Luke 1:48

May the blessings of the Holy St. Mary be with us all, Amen.