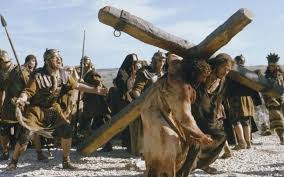 “He was wounded for our transgressions, He was bruised for our iniquities; The chastisement for our peace was upon Him, And by His stripes we are healed.” Isaiah 53:5

The Beginning of the Cross is Saturday of Lazarus, we enter into the commemoration of Christ’s suffering, death and Resurrection. Lazarus, the friend of Jesus, personifies the whole mankind and Bethany, the home of Lazarus the man, is the symbol of the whole world as a home of man. For each man was created friend of God and called to this Divine friendship: the knowledge of God, the communion with Him, the sharing of life with Him. “In Him was life and the life was the light of men.” (John 1:4) And yet this friend whom God loves, whom in love He has created, is destroyed by death. The world is but lamentation and sorrow, tears and death. Jesus’ coming to the grave of His friend, John says: “Jesus wept.” (John 11:35) God is Love and Love is life, Love creates Life…It is Love that weeps at the grave and it is Love that restores life. This is the meaning of the Divine tears of Jesus. In them love is at work – recreating, redeeming, and restoring the darkened life of man: “Lazarus, come forth!” And this is why Lazarus Saturday is the beginning of the Cross, the supreme sacrifice of love, the Resurrection and the ultimate triumph of love.

The Saturday of Lazarus and Palm Sunday (the Entrance of Our Lord into Jerusalem) both have a common theme; triumph and victory. Saturday reveals the enemy, which is death. Palm Sunday announces the meaning of victory as the triumph of the Kingdom of God, as the acceptance by the world of its only King, Jesus Christ. The Palms, the cry from the crowd of “Hosanna”, is the praise of Jesus as the Son of David and the King of Israel. The history of Israel is now coming to its end for the King enters His Holy City and in Him all prophecies, all expectations find their fulfillment.

We know however that the King whom the Jews applauded then, and whom we applause today, is on His way to Golgotha, to the Cross and to the grave, we know that this short triumph is but the prologue of His sacrifice. The branches in our hands signify our readiness and willingness to follow Him and that our acceptance of sacrifice and self-denial as the only way to the Kingdom.

But do we understand that when the world rejected its Savior, when “Jesus began to be sorrowful and very troubled… and His soul was exceedingly sorrowful even unto death,” when He died on the Cross, “normal life” came to its end and is no longer possible. For there were normal men who shouted “Crucify Him!” who spit at Him and nailed Him to the Cross. They hated and killed Him precisely because He was troubling their normal life. It was indeed a perfectly normal world which preferred darkness and death to light and life… By the death of Jesus “normal” world was irrevocably condemned. “Now is the judgement of this world” (John 12:31). The Pascha of Jesus signified its end to “this world” and it has been at its end since then. “The form of this world is passing away…” (I Corinthians 7:31)

Pascha means passover or passage. The Feast of Passover was for the Jews the commemoration of their whole history and of salvation as passage from the slavery of Egypt into freedom, from exile into the Promised Land. It was also the anticipation of the ultimate passage — into the Kingdom of God and Christ was the fulfillment of Pascha. He performed the ultimate passage: from death into life, from this old world into the new world, into the new time of the Kingdom. And he opened the possibility of this passage to us. Living in “this world” we can already be “not of this world”; be free from slavery to death and sin, partakers of the “world to come.” But for this we must also perform our own passage, we must condemn the old Adam in us, we must put on Christ in the baptismal death and have our true life hidden in God with Christ, in the “world to come…”

The first three days of the Holy Week are precisely to challenge us with this ultimate meaning of Pascha and to prepare us to the understanding and acceptance of it.

The Last Supper, two events shape the Liturgy of the Great and Holy Thursday: the Last Supper and the betrayal of Jesus by Judas. The Last Supper is the ultimate revelation of God’s redeeming love for man. The betrayal by Judas reveals that sin, death and self-destruction are due to love, but love directed at that which does not deserve love. In this day, light and darkness, joy and sorrow are strangely mixed, challenges us with the choice on which the eternal destiny of each one of us depends. “Now before the Feast of the Passover, when Jesus knew that His hour has come… having loved His own which were in the world, He loved them unto the end… “(John 13:1) To understand the meaning of the Last Supper, we must see it as the very end of the great movement of divine love which began with the creation of the world and is now to be consummated in the death and resurrection of Christ.

The Last Supper is the hour of ultimate love is also that of the ultimate betrayal. Judas leaves the light of the Upper Room and goes into darkness. “And it was night.”(John 13:30) Why does he leave? Because he loves, the “silver.” Money stands here for all the deviated and distorted love which leads man into betraying God.

Friday, is the day of Christ’s Passion, Death and Burial. Passover will be gradually revealed to us, first, in the great Saturday and then in the joy of the Resurrection day. Good Friday deals not with past alone. It is the day on which the Church invites us to realize their awful reality and power in this world for sin and evil constitute the basic law of the world.

Great Friday is also the day of Redemption. The death of Christ is revealed to us as the saving death for our salvation. It is a saving death because it is the full, perfect and supreme Sacrifice.  There is no other way to destroy death, to save men from it and it is the will of the Father that men be saved from death.  Man chose to be alienated from God, but having no life in himself and by himself, he dies. Yet there is no sin and therefore no death in Christ. He accepts to die only by love for us. He wants to assume and to share our human condition to the end. He accepts the punishment of our nature. His death is the ultimate revelation of His compassion and love. And because His dying is love, compassion and co-suffering, in His death the nature of death is changed. From punishment it becomes the radiant act of love and forgiveness, condemnation is transformed into forgiveness. Christ’s death is a saving death because it destroys the very source of death which is evil. By accepting it in love, by giving Himself to His murderers and permitting their apparent victory, Christ reveals that in reality this victory is the total defeat of Evil.

Saturday is the day which connects Good Friday with the Day of Resurrection.  There is a day of sorrow, and then, there is the day of joy, Christ has “trampled death by death.” In the morning of Holy Saturday we stand at the grave of our Lord, we contemplate His death, His defeat. Psalm 118 is sung and to each verse we add a special “praise” which expresses the horror of men and of the whole creation before the death of Jesus: “O all ye mountains and hills, and all ye gatherings of men, mourn, weep and lament with me, the Mother of your God…” Since Christ’s whole life had no other “content” but the fulfillment of His Father’s will, the Church interprets this psalm as the words of Christ Himself, spoken to His Father from the grave. “Consider how I love thy precepts! Quicken me, O Lord, according to thy loving kindness.” (Verse 159)  The death of Christ is an act of pure obedience, of full trust in the Father’s will.

Sin comes from Satan and Death is the result of sin — “sin came into the world and death through sin” (Romans 5:12). The entire universe was condemned to destruction and despair. And this is why death is “the last enemy” (I Corinthians 15:20) and its destruction constitutes the ultimate goal of the Incarnation. He said “for this purpose, I have come to this hour.” (John 12:27)

Jesus crucified, abandoned by all endures a shameful death. He also becomes the partaker of “Hades,” but at this very moment, the real meaning of this death is revealed. The One who dies on the Cross has life in Himself, for He is the life and the Source of all life.  Jesus who dies is God, God is the Holy Immortal; and only in the unity “without confusion, without change, without division, without separation”. In Jesus, man overcomes sin and evil. It was essential that death were not only destroyed by God, but overcome and trampled down in human nature itself, by man and through man. “For as by a man came death, by a man has come also the resurrection of the dead.” (I Corinthians 15:21)

Hades is destroyed. Hades trembles. And now the last theme appears – the theme of Resurrection, it achieves and completes the history of salvation, its last act being the overcoming of death. But after the Sabbath comes the first day of a new creation, of a new life born from the grave. As His death destroys the very principle of death, His Resurrection is the token of the Resurrection of all, for His life is the source of every life. We believe in the Resurrection, because Christ has risen from the dead. We know that Christ’s death has annihilated the power of death, and death is no longer the hopeless. Baptized into His death, we partake already of His life that came out of the grave. We receive His Body and Blood which are the food of immortality. We have in ourselves the token, the anticipation of the eternal life, we wait in love, hope and faith.